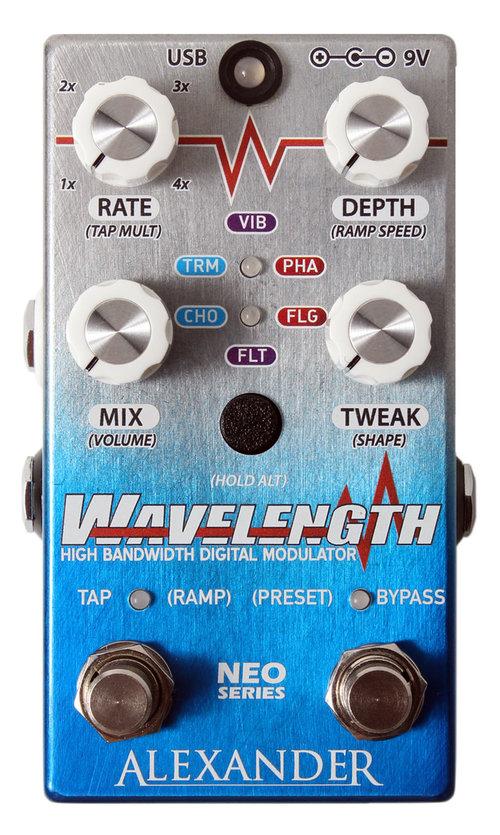 We?ve added some welcome improvements like more modulation engines and tap tempo, and some cool surprises like selectable waveforms.? It?s a true all-in-wonder for your modulation needs.

We crafted the Wavelength to handle a big range of modulation sounds and textures. It can take you from a throbbing square-wave tremolo to a slow ramping filter, then over to a rich doubled chorus and into a wicked flange - just by holding one footswitch! Its sounds are deep and rich, but its user interface is simple: just turn the knobs and let it rip.

TRM? Tremolo - this effect cycles your volume up and down for a cool rhythmic texture.? Twist the Tweak control to morph between standard tremolo and harmonic vibrato.? Don't forget you can use the Level control to bump up your volume and make up for any drop you might get from the effect!

FLG Flanger - ranges from subtle comb filtering to insane jet whoosh.? Use the Tweak control to adjust the feedback for a sharper flange.

VIB Vibe -?photocell and lamp style vibe effect.? The Tweak knob adjusts the balance and symmetry of the shift stages and the effect gets more pronounced as you increase the control.

FLT Filter?- resonant low-pass filter effect.? Tweak controls the resonance of the filter.? Be careful, this can self-oscillate at higher settings!? Sounds killer with the Random waveform, ship ahoy!